Driving While Black: African American Travel and the Road to Civil Rights 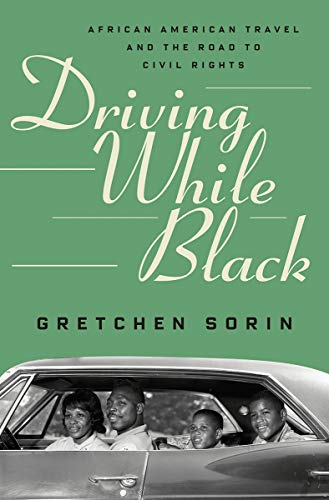 It’s hardly a secret that mobility has always been limited, if not impossible, for African Americans. Before the Civil War, masters confined their slaves to their property, while free black people found themselves regularly stopped, questioned, and even kidnapped. Restrictions on movement before Emancipation carried over, in different forms, into Reconstruction and beyond; for most of the 20th century, many white Americans felt blithely comfortable denying their black countrymen the right to travel freely on trains and buses. Yet it became more difficult to shackle someone who was cruising along a highway at 45 miles per hour.

In Driving While Black, the acclaimed historian Gretchen Sorin reveals how the car―the ultimate symbol of independence and possibility―has always held particular importance for African Americans, allowing black families to evade the many dangers presented by an entrenched racist society and to enjoy, in some measure, the freedom of the open road. She recounts the creation of a parallel, unseen world of black motorists, who relied on travel guides, black only businesses, and informal communications networks to keep them safe. From coast to coast, mom and pop guest houses and tourist homes, beauty parlors, and even large hotels―including New York’s Hotel Theresa, the Hampton House in Miami, or the Dunbar Hotel in Los Angeles―as well as night clubs and restaurants like New Orleans’ Dooky Chase and Atlanta’s Paschal’s, fed travelers and provided places to stay the night. At the heart of Sorin’s story is Victor and Alma Green’s famous Green Book, a travel guide begun in 1936, which helped grant black Americans that most basic American rite, the family vacation.

As Sorin demonstrates, black travel guides and black-only businesses encouraged a new way of resisting oppression. Black Americans could be confident of finding welcoming establishments as they traveled for vacation or for business. Civil Rights workers learned where to stay and where to eat in the South between marches and protests. As Driving While Black reminds us, the Civil Rights Movement was just that―a movement of black people and their allies in defiance of local law and custom. At the same time, she shows that the car, despite the freedoms it offered, brought black people up against new challenges, from segregated ambulance services to unwarranted traffic stops, and the racist violence that too often followed.

Interwoven with Sorin’s own family history and enhanced by dozens of little known images, Driving While Black charts how the automobile fundamentally reshaped African American life, and opens up an entirely new view onto one of the most important issues of our time.

One Response to Driving While Black: African American Travel and the Road to Civil Rights